Your toolkit for winning fights with Republicans 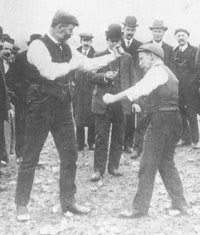 Three fallacies have been popular with dishonest politicians for centuries -- they even have names in Latin (and probably ancient Egyptian and Sanskrit for that matter). Here are the three perennial favorites:

1. Ad hominem: attacking your opponent instead of his argument, with insults and other nonsense.

2. Ignoratio elenchi: is simply evasion -- making a statement which is irrelevant to the issue at hand, to change the subject. For instance, refuting facts about Bush’s crimes with statements about Clinton and Monica.

So now when your opponent is losing an argument, and tries to change the subject with an irrelevant tangent or an insult or yet another lie, you can slap him down in two languages! Impress your friends! Throw down the dreaded gauntlet of "BOVIS FIMUS!" when they screech that Obama is a gay Muslim socialist who kills babies and eats them.

Or -- Vos es patesco, which is Latin for "YOU'RE BUSTED!"


To be blunt, the people I’ve been debating aren’t clever enough to think beyond the Big Three – lies, evasions, attacks. At most they might pull out a Straw Man or Cherry Picking. But actually there are many, many forms of bad, fallacious logic. A number of them are listed here:

Here are just a few of my favourites, all of which have been employed by Republicans in the last few months:

False attribution: an advocate appeals to an irrelevant, unqualified, unidentified, biased or fabricated source in support of an argument. For example, Republicans citing Fox, Drudge, Newsmax, Worldnetdaily.....
Cherry picking: using only the data that supports your position, while ignoring the rest. For example – looking only at the polls which showed McCain leading Obama in Pennsylvania, and ignoring Obama’s good polls.
Quoting out of context: speaks for itself.
Bare assertion fallacy: favored of Christian evangelicals – the Bible says it’s true, and we say the Bible is infallible, therefore it really must be infallible.
Appeal to authority or tradition: the president (or my father) says it, it must be true.

Special pleading: using an emotional appeal to change the rules of the argument. I was poor longer than you, so my policies on poverty and jobs must be better.
Appeal to consequences: rejecting inconvenient facts. Democrats say Bush’s tax cuts are a bad idea, but if we repeal them I must pay more, so they must be wrong.
Appeal to novelty: my idea is better because it’s new. Converse of the appeal to tradition.
Appeal to poverty, or wealth. He must be honest because he’s poor. She must be smart because she’s rich.

Poisoning the well: smearing your target so that anything he says will be ignored.
Straw man: misrepresenting the other guys’ argument – putting words in his mouth.
Association fallacy: you must be wrong because you hang out with people I don’t like.
Ad hominem: attacking your opponent instead of his argument. Often answered by the “tu quoque” argument, literally “you too!”
Appeal to ridicule: dishonestly re-stating your opponent’s argument in a ridiculous way. See “straw man”.
Burden of proof: insisting that your opponent meet an unnaturally high level of proof. “Barack Obama didn’t personally deliver to me the original of his birth certificate, and his parent’s birth certificates, with background investigations of everyone who was in the delivery room when he was born...”


SHOUTING YOUR ENEMY DOWN

Ignoratio elenchi: making a statement which is irrelevant to the issue at hand. For instance, refuting facts about Bush’s crimes with statements about Clinton and Monica.
Red herring: an irrelevant, evasive response to an argument.

Bovis fimus, outright lies. Also...
Fallacious question: a question which is based on a dishonest premise

Base rate fallacy: because a particular tool, such as polls, didn’t work on one occasion, all polls are wrong.
False dilemma: posing two options as the only alternatives, even though other options exist.
Nirvana fallacy: if a proposal isn’t a perfect solution to the problem, it must be scrapped. For example – because ObamaCare doesn’t cover everyone immediately, it is junk.
Negative proof fallacy: because we can’t prove it true, it must be false.
Argumentum ad populum: everyone believes it so it must be true. Everyone believed Saddam had nukes in 2003.
Post hoc ergo propter hoc: 911 happened after Bush’s election, therefore Bush caused 911.
Syllogistical fallacies: there are so many they need their own link: http://en.wikipedia.org/wiki/Syllogisms
Loki’s wager: if you can’t define it, you can’t discuss it. Used by evangelicals to refute arguments about “God”.
Argument from ignorance: it must be true because it hasn’t been proved false. Used often by Republicans to “prove” that Bush didn’t commit impeachable offenses.
The “sunk cost” fallacy: because we have invested effort into something, we must stick with it no matter what, so the costs we sunk into it aren’t wasted. See “Iraq”.
Converse accident: applying the exception to the rule. If we let rape victims have abortions, we’re condoning it for everyone else.
Slippery slope: first we allow abortions, and then they will demand that we kill retarded children and old people....
The appeal to probability: because Hillary could be a lesbian, she must be a lesbian.
Argument from fallacy: because Congressman Henry Waxman failed to prove on 20 January that Bush is a criminal, Bush cannot be a criminal.
Denying the correlative: pretending that non-existent options exist. “Either Fido is a dog or he isn’t a dog.” “But what if he’s only a dog on weekends?”
If by whiskey: trying to evade the rules by using emotionally-loaded words to argue.
Naturalistic fallacy: what is good in nature must be good in human ethics.
Package-deal fallacy: because people who like low taxes often oppose abortion, all opponents of high taxes oppose abortion.
Affirming the consequent, or illicit conversion: backwards logic. If all al-Qaida terrorists were Muslims, then all Muslims must be terrorists.
Denying the antecedent: all al-Qaida terrorists are Muslims. You’re not al-Qaida, therefore you’re not a Muslim.
Proof by example: Muhammad Atta is a terrorist, therefore all Muslims are terrorists.
Begging the question: using circular logic, trying to prove the conclusion with the original assertion.
Circular cause and consequence: claiming the result of a phenomenon actually caused the phenomenon in the first place.
Continuum fallacy: everything is relative.
Equivocation: Do women need to worry about man-eating sharks?
Fallacy of division: 747’s can fly, 747 engines are part of 747’s, therefore 747 engines can fly.
Ecological fallacy: if 70 percent of Alabama blacks support Obama, then if you pull a black guy off the street he will be an Obama fan.
Fallacy of the single cause: assuming there is only one cause for a phenomenon.
Historian’s fallacy: assuming that people in the past saw the world the same way we do.
False compromise: the middle choice is always best.
Monte Carlo fallacy: the coin came up tails ten times in a row, so heads must be next.
Regression fallacy: a number of phenomena consist of behaviour that oscillates across a median – i.e. back in January, Hillary’s national polls bounce up and down but generally return to the 40-percent level. If she wins Nevada and bounces from 37 up to 40, that doesn’t mean Nevada got her up there – she was probably going to bounce back anyway.
Retrospective determinism: Martin Luther King was murdered by racists...but it was bound to happen.
Fallacy of accident: ignoring exceptions. Cutting people with a knife is a crime. Therefore surgeons are criminals. See also -- Dicto simpliciter.
Misleading vividness: applying a specific example to an entire pattern. Dang, Tejada got a hit off us – we should pitch around him every time after this, or he’ll hit it every time!
Spotlight fallacy: individuals in a particular group will act like the most visible members of that group. Because Bjork wore a swan costume to the Oscars, everyone in Iceland dresses that way. Brr!
Thought-terminating cliché: ignoring facts which violate a popular cliché.
Texas sharpshooter fallacy: implying a pattern that is invalid. For example – a Texas sharpshooter shoots a his barn with a rifle, draws a circle around the bullet hole, and says “hit it!”

Great list! I comment on a couple of other blogs in which quite a few of these strategies are employed. Now I will be able to identify and report the condition before I smack them down.

Generally the Republicans only have the wit to use the Big Five -- lies, evasions, attacks, Straw Man, cherry-picking. Not a very imaginative bunch -- and they usually run from a fair fight anyway.