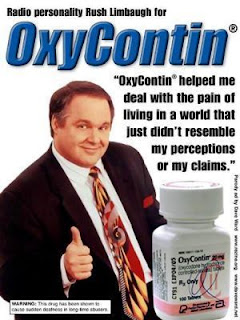 Revenge of the white guys: Mike “Hip Hop” Steele is forced to apologize to the Great White Hope, Rush Limbaugh, for...telling the truth. Rush, unappeased, blasts Steele on his radio show. Steele calls and apologizes yet again. Jindal, Little Brown Guy Number 2, apologizes for his lousy natonal TV speech, and then praises Rush as a great leader and said it was right that Steele had to apologize. So much for the GOP’s affirmative action internship program!

But this Rush Limbaugh Saga is not the first time we’ve seen this movie. We watched the same drama in 1950.

America is taken over by a substance-abusing loudmouth demagogue from the Midwest who will tell any lie, no matter how outrageous, in order to keep the mikes and cameras pointed at him. Exploiting a time of fear, he shrieks socialism over and over, no matter how many times his lies are exposed. He uses the power of the media and the support of his army of semi-literate dunderheads to terrorize and destroy anyone who dares challenge him. He hides behind his position, so he need never fear a real challenge or, God forbid, accountability. The leader of the Republican party is appalled by what this idiot has done to the conservative movement, but he is too cowardly to challenge the demagogue. The demagogue terrorizes his own party by accusing moderate Republicans of treason (in time he is condemned by Senator Susan Collins and praised by Ann Coulter). The demagogue becomes more powerful than the Republican leadership. He even tries to interfere with congressional races that are none of his business, trying to tell people who to vote against.

Finally the demagogue destroys himself with his own excesses, but in the process he also destroys the Republican party, paving the way for Democrats to take over and enact all those governent programs he hates the most.

This sounds like the Rush Limbaugh story, but actually it is the story of Joe McCarthy. And just as McCarthy, destroyed, croaked at the age of 48 from cirrhosis of the liver, soon Rush will be bumbling down the hallways of Xanadu in a drug-induced haze, muttering “Rosebud”. Up the meds!...Because serial liars eventually get caught.

To paraphrase what Murrow said famously of McCarthy: Upon what meat does this our Limbaugh feed, that he has grown so great?

Meanwhile, the guy who made his bones by writing that “Rush Limbaugh Is A Big Fat Idiot” will soon go to the Senate. When do the GOP tactics in Minnesota become nothing more than stall-ball...?


People as varied as Stalin and Orwell (and Bloomberg, recently) have pointed out that every great leader needs enemies, and if he doesn’t have them he must create them.

The problem for Obama, if you want to call it a problem, is that the GOP is now in such disarray that they don’t even have unified philosophies, strategies or goals anymore – they are completely lost, with moderates under fire from true believers, and supply siders clashing with culture warriors clashing with neocons. And by the same token, they don’t have clear leaders. McConnell is too busy trying to hold his troops together for possible filibusters, but fully one third of his Senate Republicans have voted with Obama, not against him, on a majority of the bills proposed so far. On the House side, Boehner is a heinous fake suntan with no brain, pursuing the same unanimous-rejection strategy on the current stimulus package, that Gingrich used on Clinton ’s stimulus package in 1993, a package which helped generate 20 million jobs and reelect Clinton . D’oh!

So right now Obama doesn’t really have a clear enemy to campaign against. Clinton had the Gingrichs and Atwaters of the world, and the Bush administration provided an incredible rogue’s gallery of irresistible targets for Democrats to shoot at, from Rumsfeld to Craig to Vitter to Gonzalez. But now, nobody. Obama can’t really use Bush as a target, because the Republicans are already targeting Bush themselves, accusing him of betraying their conservative principles: when Obama attacks Bush, a Republican simply says “me too!” And demonizing a Capitol Hill Republican makes it hard to serve bipartisanship and seek GOP votes to get things done, at least for this year (2010 is an election year of course so the gloves come off). And America ’s GOP governors are mostly people that no one has ever heard of, with a few exceptions like Palin.

So did Obama fume in frustration? No. He picked Rush Limbaugh as his enemy. And notwithstanding all the handwringing from Democrats, it was brilliant. Rush is not a lawmaker of any kind, he perfectly reflects everything America hates about the GOP, he’s an easy target since he has no expertise in practically anything, and most importantly he actually wants to be that target.

Rush walked right into Obama’s trap. After proclaiming that he hopes Obama’s efforts fail, Rush began gassing away in the Wall Street Journal about his own proposal for the economy. He insisted Obama’s plan wasall pointless partisan pork. He claimed that Keynesian economists, supply-side economists, and the American people all would prefer his own plan, which is essentially a big tax cut for the rich and corporate fatcats. Rush grandly proposed to combine Obama’s plan and his own, and call it the Obama-Limbaugh Stimulus Plan of 2009, by spending half the money on Obama’s alleged pork and half on Rush’s tax cuts. And he capped it all off with this: “The leader of the Democrats and the leader of the Republicans (me, according to Mr. Obama) can get it done.” He has promoted himself to party leader already.

Incredibly, Republicans are now waking up into a new world in which Rush has in fact taken over the leadership of the party, because no one else had what it takes to seize the reins. A GOP Congressman who had told Rush to back off, was forced to call Rush on his show and apologize for his “stupid comments”, calling him a “conservative giant”.

Let’s remember that Obama, one of the most gifted politicians of the last century, will have no trouble outsmarting Limbaugh. Rush, who has been proclaimed by his drooling fans to be America's anchorman, America's truth-detector, a living legend, Doctor of Democracy, the Mr. Big of the vast rightwing conspiracy, the most dangerous man in America, talent on loan from God, the man who is running America, the mandarin of talk radio, chief of the non-existent “Excellence In Broadcasting Network” and the “Limbaugh Institute of Conservative Studies” – is actually an empty suit. After two semesters at the hardly-brutal cow college of Southeast Missouri State University, Rush flunked out and spent the 1970s wandering up and down the dial as a DJ, before finally stumbling into the no-talent-required world of talk radio. So essentially he’s never been able to successfully hold a real job in the real world, and has no expertise of any kind in any of the topics he bloviates about – economics, national security, foreign policy, anything. So setting Rush up as an enemy, and then destroying him, will be child’s play for Obama.

So Rush, is dangling from a tree branch, dressed in holiday colors like a gigantic piñata, shouting “Look at me! Look at me!”…while Obama is walking up with a Great. Big. Stick.

And after he spends two years whupping up on Rush as the poster boy for GOP incompetence, winning the 2010 elections handily in the process, he will train his sights on Palin and the other 2012 contenders. And win handily again.

My fear is that, as much fun as it is to boot Rush in the plums as hard and often as possible, we are being lead into trap that will be sprung two years down the line when the real Republican leadership emerges from their spiderholes and shrieks about how shitty the economy is and how Obama spent all his time arguing with a talk show host instead of fixing things.

So far, Obama has been smart enough to avoid engaging directly with the fat poultroon and must continue to do so. He has plenty of people who can get their hands dirty with Rush on his behalf, but he cannot be seen tangling with a talk show host. It isn't that he couldn't make Rush cry inside of about three minutes - he'd bury the fat bastard without having to think about it - but it demeans the office of the president and gives weight to the radio buffoon if the president appears to see him as a bona fide opponent, rather than something to scrape off his shoe.

Quite right -- Obama sets Obama up as the pinata, but lets other folks beat him to death.

Does the name "Rhamn" ring a bell?

Rahm is old-school -- something the Democrats haven't had since LBJ.

Go read Caro's "Master of the Senate". That was a REAL Democrat.