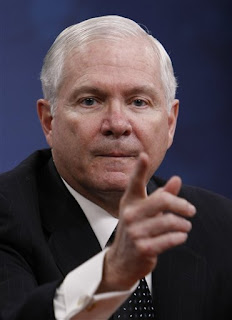 So now that the grownups are in charge, where will all the money go?


There will be areas in which investment will go up: the tools for low-density conflicts, logistics, intelligence, urban warfare, peacekeeping, special operations, helicopters which are always in short supply.

A critical need is the care and feeding of our troops, in everything from armored APC’s to hospitals and mental health. Ironic how the party that screeched “support our troops” for five years forgot to actually support the troops. The Bush administration underestimated the cost of care, dragged its feet on treatment, and did not hire enough mental health professionals. The administration, behind everyone’s back, rewrote the definition of combat-related disabilities to screw our veterans out of tons of benefit money. The VA and Walter Reed are in disarray. Bush’s VA chief promised to cut the 6-month delays for disability benefits but never delivered; they also need an IT upgrade. There are record rates of PTSD and suicide. Hundreds of thousands of vets and relatives cannot get care. Exhausted military pilots are racking up more accidents.

Even with dangerously lowered standards, recruitment and retention are inadequate. A weak economy and the drawdown in Iraq will bring recruiting and retention back up, but there’s nothing like treating our troops the way they deserve.

Obama took a giant step forward by giving the VA job to General Eric Shinseki, the guy who said we needed more troops in Iraq and was then shoved aside by Rumsfeld and Wolfowitz.

There are many ways to save money without increasing risks.

Our procurement system is a sea of pork: we must take a good hard look at the contractors, the oversight people, the lobbyists and the congressmen whose arms they twist and whose palms they grease. We also need to stay on top of base closings – more pork. In Iraq we learned many hard lessons about what happens when oversight does not happen – billions were wasted, Haliburton put raw sewage in drinking water and gave our troops diarrhea, Blackwater shot and ran over civilians with impunity, and investigations were obstructed.

The process of identifying a need and filling it must speed up: it took too long for us to react to the IED’s by ordered up better armoured cars, and choppers have been in chronic shortage.

Some argue for saving billions by cutting our nuclear arsenal down to about 1000 weapons on ten Trident submarines, although Gates said that if we draw down nuclear weapons we must either test them or modernize – pricey.

Good diplomacy can get us more basing agreements, thus reducing the pressure on our carriers to project power: dirt is cheaper than carriers.

We need to ask how many bombers we need, and what for.

Again, it’s refreshing, and a little shocking, to have a grownup in charge.