The Republicans, waiting for Godot 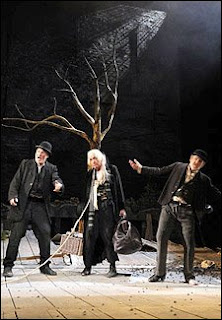 A key role of a political party is to find and nurture the leaders of tomorrow. Government and leadership are actual skills that need to be learned and developed.
The Democrats have had mixed success. For every Clinton or Obama, they come up with a Dukakis or a Kerry, who just lets the rightwing loons punch them in the face.
But the Republicans have made almost no progress, because their emphasis was elsewhere. Instead of raising a generation of leaders, they were training polical hacks. They have an entire finishing school for scumbag political hacks like Roger Ailes, Lee Atwater, Ed Gillespie, Karl Rove, Jack Abramoff (who played their game early on), Newt Gingrich, and so forth. This team served Reagan well, and managed to steal two elections for Bush with their patented cocktail of lies, smears, gutter tactics and wedge-issue politics. But leadership, um, no.
Not only are the Republicans not developing quality leaders, but when a potential leader like Crist or Pawlenty or Collins steps up and shows some leadership ability, saying “maybe we need to dial back the sledgehammer tactics of the last 30 years”, the party tries to marginalize them, or even punish them. They even tried to marginalize Bush 41 and John McCain on suspicion of insufficient loyalty. To Republicans, a capacity for responsible leadership is seen as a character defect.
So who is the GOP leadership now? Who are the people who have stepped forward to be the public face of the GOP?
Rush Limbaugh, in love with porn, drugs and the sound of his own voice;
Sarah Palin, an air-headed arch-criminal with a family that would raise eyebrows in the most backward holler in West Virginia;
Mike Steele, the first invertebrate ever elevated to party chair;
Bobby Jindal, who makes Steele look like John Wayne;
Sean Hannity, who shares Palin’s uncanny ability to lie to the camera without giggling or blinking;
Rick Santelli, a “reporter” who thinks he’s the next Samuel Adams;
Ann Coulter, who, even more than Rush, is willing to commit any bigoted outrage just to keep the cameras pointed her way;
John “Tanning Bed” Boehner;
Mike Huckabee, who wants to put HIV patients in concentration camps;
Rick Perry, a freakish Mary-Tyler-Moore hairdo, who insulted the same people whom he was begging money from, to clean up his fiscal mess;
Mitch McConnell, who would filibuster the cafeteria menu if the Democrats were the ones proposing it;
Mitt “Multiple Personality” Romney, who has had multiple positions on virtually every issue...
...and it just goes downhill from there.
Seriously, isn’t this the perfect cast for a remake of “ Twin Peaks ”?
Or maybe “Cuckoo’s Nest” – get Sarah in that hot little nurse’s uniform?
It is because the party refused to develop its own leaders, that these morons were able to step into the power vacuum.
How far does a party have to fall, before they find themselves in a position in which a lying scumbag like Newt Gingrich is considered their elder statesman?
Is there anybody who seriously wants this Volkswagen-load of clowns to run the country, make fiscal policy, energy policy, health care policy? Especially after the economic disaster they caused when they had all the power the first time?
Compared to these circus freaks, the Obama administration looks like it just stepped down off Mount Olympus .
The Republicans decided 30 years ago that politics was more important than policy, that it was more important to attack America ’s Democrats than to attack America ’s problems. That leadership isn’t important.
Ya reap what ya sow.

In Samuel Beckett’s famous play, Waiting For Godot, two guys named Vladimir and Estragon sit under a tree, waiting for a guy named Godot. One of them admits that even if Godot ever does come, he will do nothing very definite. A boy arrives, claiming to be a messenger from Godot, promising that Godot will be arriving soon. The two guys finally decide to give up waiting, but then they keep sitting there. They can’t let go of the idea that Godot is coming, although he never arrives.

Right now the Republicans are Vladimir and Estragon.

They sit under their tree, waiting for a new Reagan to liberate them and make them kings again; they are so desperate for this outcome that they even embraced Sarah Palin as their redeemer.
They wait for America ’s economy to collapse, so they can blame the Democrats for all their woes.
They wait for another 911 attack, so they can accuse the Democrats of not protecting America .
They wait for the American people to wake up and realize that the GOP formula of culture wars at home, holy wars abroad, gigantic debts, and unregulated billionaire crooks really is a winning formula, despite the fact that America has finally realized -- Reagan’s snake oil formula can kill you.
They wait for blacks, Hispanics, gays, women and the young to realize the error of their ways and join the GOP.
They wait for an internet miracle to save them, because they think an internet miracle created Obama.
They wait for the shrinking, divided evangelical movement to rise from the dead and lead them to another victory.
They wait for a new leader to do what Gingrich and Barbour did in 1994, attack Clinton, a clumsy president who was afraid of a fight, and build a Republican revolution. They don’t realize that no such leader is coming, and if he did, Obama could deck him with ease.
They wait each Sunday for God to come again, notwithstanding the fact that “God” hasn’t come back for 2000 years and, judging by the sloppy, disastrous state of the nation and the world, has been off the job entirely for centuries.
They wait for leadership because they are incapable of leading.

If they had real leaders, they would be putting their own ideas on the table, instead of screeching about Democratic ideas. So far their only ideas are the old discredited Reagan stuff – tax cuts etc.
The same Republican governors who were saying a month ago that Congressional Republicans couldn’t get anything done, and that only the GOP governors could actually craft GOP ideas and put them in action – are the same people who are now standing in line begging Obama for gummint money. Instead of presenting new ideas for how they will use this money to chart a new course, they intend to drink it all up in their efforts to pay for their past errors and follies.
Right now their Mount Rushmore of leadership is Rush Limbaugh, an ignorant, cowardly, drug-addled comedian; McConnell and Boehner, whose only skill is mindless obstruction; and Steele, whose one experience with actual leadership was an abortion of a Senate campaign.
Fellas, if you’re going to pick a wooden-headed marionette like Steele to represent your party to the world, that’s Step Two. Step One is to pick the guy at the other end of the strings – the real leader. The only thing more worthless than a puppet leader is a puppet with no one controlling him.
The Republicans have had three months to admit, or at least accept, their many errors. Three months to chart a new course. Three months to find new leaders. And what did they do?
They did in fact have two series of key meetings – in which they went backwards instead of forwards. In a meeting in Virginia , they resolved to move the party even further to the right, and expel all moderates. And in January, instead of picking a real leader, they picked Steele, the marionette.

Vladimir and Estragon sit under the tree.
They look at each other.
Neither one moves.

Real leaders don’t sit under trees waiting for a leader. They lead.