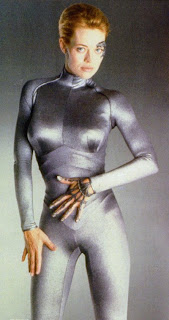 Obama was put in the White House by 40 humans, and one space alien.

Seven of Nine, a member of the Borg Collective, came to earth and, as Jeri Ryan, married Jack Ryan, an Illinois politician. Their ensuing divorce battle derailed Jack's Senate campaign, thus making the impossible possible -- the election of an unknown young black guy, Barack Obama, to the Senate. Thus beginning Obama's march to the White House.

Forty. John Edwards, who was supposed to be the guy to ambush Hillary in Iowa ; because of Edwards’ ineffectiveness, Obama did it instead.
Thirty-nine. Paris Hilton, who cleverly exploded McCain’s “celebrity” attack strategy.
Thirty-eight. Bill Clinton, who finally endorsed Obama at the convention, and very effectively.
Thirty-seven. Valerie Plame, who exposed the Republicans as a bunch of vindictive liars.
Thirty-five, 36. Mike Wooten and Walter Monegan, who exposed Palin’s corruption, vindictiveness and dishonesty.
Thirty-four. Harriet Miers, who turned the preposterous cronyism of the GOP into a punchline.
Thirty-three. Joe Biden, gave Obama an acceptable alternative to Clinton as VP.
Thirty-two. Cindy Sheehan, called a spade a spade in Iraq .
Thirty-one. Lynndie England , the poster babe for the Abu Ghuraib torture case.

Twenty. Howard Dean, who declared that Democrats must fight in all 50 states. Because of him, Obama was using the Dakotas, Montana and Georgia to attack McCain with.
Nineteen.John Murtha. Yes, he’s a loudmouth, but he was the war veteran who first had the guts to call Bush’s Iraq fiasco a fiasco.
Sixteen, 17, 18. Craig, Vitter and Foley, who transformed the GOP from the self-proclaimed “family-values” party into the sleaze party; they helped begin the GOP meltdown in 2006.
Fifteen. Hillary, who fought hard enough to toughen Obama up, but not tough enough to beat him.
Fourteen. Mark Penn, who single-handedly destroyed Hillary’s campaign.
Twelve and thirteen. Charlie Gibson and Katie Couric, for exposing Palin’s stupidity.
Eleven. Abu Musab Zarqawi, who took advantage of Bush’s stupidity to launch the insurgency which wrecked Bush’s Middle East crusade.

Ten. Usama bin Laden, who drove Bush to preposterous extremes, trashing the Constitution, the US budget, America ’s reputation, and the US military, all to fight an ill-defined war on terror and hunt a “mastermind” who is still at large.
Eight and nine. Axelrod and Plouffe, who did everything Team Hillary couldn’t: assemble a strategy consisting of one groundbreaking innovation after another, from fundraising to organizing volunteers.
Seven. Schmidt, who dragged McCain away from the one strategy that could have worked – running as himself – and turned him into a Rove-style attack dog.
Six. Sarah Palin, dangerously clueless, dangerously ruthless, dangerously corrupt. An energetic liar who lasted about 2 minutes under the scrutiny of the national media.
Five. McCain, whose self-manufactured war-hero-maverick schtick crumbled under the weight of his lies, his ugly tactics, his crooked deals, his embrace of Bush’s policies, his cluelessness on both policy, his earmarks, and his ugly, public anger at that Negro whippersnapper.
Four. Rove, who crafted the Republican strategy of ignoring moderates and employing smear tactics, the very strategy which killed McCain.
Three. Reagan, who crafted the coalition of culture war social conservatism, supply side economics and deregulation, and chest-beating foreign policy – which destroyed Bush’s presidency, McCain’s candidacy, and the future of the GOP, by driving all but the die-hards out of the party.
Two. Richard Fuld, the Lehman Brothers chairman who stubbornly refused to take the actions which would have saved the firm, thus beginning the fiscal avalanche that destroyed the international banking system.
One. Bush, who destroyed his country and his party so egregiously that historians have already deemed him the worst president in US history.

What an oddball assortment of supporting players. Seven of Nine is the most normal-looking of the bunch. And, of course, she's hot enough to melt concrete.

Congrats on your blog.

Thanks! What would you like me to cover next?

Personally, I'd like a deeper exposition of the history of the 1930's that you commented on at Drifty's place I responded there that I had never heard this info before. At times like these, I suspect history is on the path to an attempted repeat.