One of our detainees, Ibn al-Shaikh al-Libi, has died. Initially al-Libi told interrogators he had no information about a link between Iraq and al-Qa’ida, so he was jammed into a coffin and then, 17 hours later, pulled out and beaten; he did not want to be tortured so he suddenly “remembered” that Saddam was training al-Qa’ida terrorists to use WMD’s in attacks. Bush used these fabricated lies to justify invading Iraq, but al-Libi later admitted that the whole story was bogus.
He has now conveniently committed suicide in a Libyan jail.

...and PoliticalBase is reporting that according to a Red Cross report, Bush’s torture program violated international law, and that Khalid Shaikh Muhammad, like al-Libi, lied to interrogators to stop the torture.

Also, former Senator Bob Graham has backed up Pelosi’s assertion that the Bush gang did not tell all regarding the torture in 2002.

Incidentally Crooks and Liars scored a double today – they also posted a brilliant photo of the teabag protesters surrounded by all of the government-funded programs they condemn. 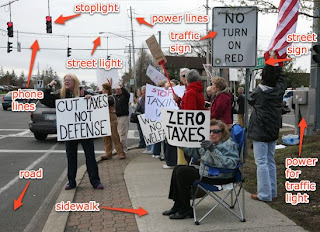