Almost a century ago a young Jewish girl named Hedwig Kiesler lived in Vienna. At nineteen she married a much older man, an arms manufacturer, who sold weapons to the Axis and entertained Hitler and Mussolini in their home. Her husband took her to meetings with experts in military technology, and she began to show interest in science, and eventually became a gifted mathematician. Eventually, fed up with her life, and possibly disgusted with her husband’s Axis customers, she persuaded her husband to allow her to wear her most expensive jewelry to a fancy dinner – and then escaped Austria for Paris, apparently hiding in a brothel along the way. This was the late 1930s, a particularly good time for a perceptive Jewish girl to get the hell out of Europe and go to America.

Together with one of her new neighbors, she developed a system of frequency-hopping. The design was intended for use in radio-guided torpedoes, using the frequency system to make it harder to jam the weapon guidance. It was so revolutionary that it took twenty years for engineers to figure out how to make it work: its first practical use was in the Cuban missile crisis. The frequency-hopping system eventually evolved into spread-spectrum communication technology which led to Bluetooth, Wi-Fi and cellphones – all from an idea this girl cooked up in 1941. Unfortunately she allowed her patent to lapse, and didn’t make a nickel on her innovation, but for a while she still managed to do so well that she was able to loan out her mansion to be used as the von Trapp estate in the Sound Of Music.

So why doesn’t the world know Hedwig Kiesler? Actually she is quite well-known. Her professional name was Hedy Lamarr. The actress who worked with Clark Gable, Jimmy Stewart and Spencer Tracy, and also became notorious in 1933 for making “Ecstasy”, a film so explicit and shocking that even today it would have to be shown on cable – banned in the U.S. and condemned personally by the pope. Her profile was so stunning that her face was the top choice for Hollywood plastic surgeons and their customers to copy. Her one moment of true cluelessness as an actress was turning down the role of Ilsa in Casablanca. And in her spare time, fully clothed (presumably) and wielding a slide-rule (look it up, kids), she made a lot of our modern IT toys possible.

So if you turn on your iPad and watch that shocking 1930s movie with the Austrian girl waggling her Elsewheres for the camera, remember that later on that girl made it possible for you to watch it on that screen. It's her hundredth birthday this year. 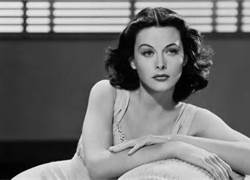